Manfred of Sweden
The King of Canine Couture 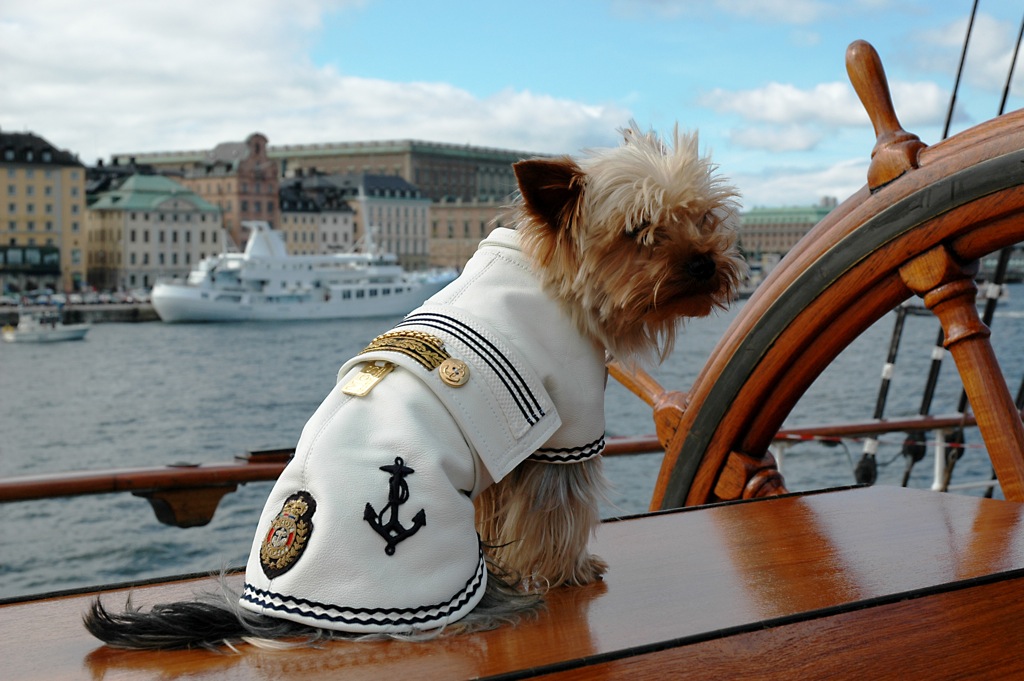 Little could Björn and Ann Gärdsby have guessed the path that their lives would take nearly a decade ago, when they acquired a young Yorkshire terrier called Manfred. Soon afterwards, when out for a walk on the streets of Malmö in southern Sweden, Manfred appeared cold. Ann then visited the local pet stores, searching in vain for a suitable coat for their beloved pet. Nothing fitted him properly.

So in desperation, when Ann arrived home, she decided upon a drastic solution. She raided Björn's wardrobe and took one of his leather jackets. Before long, with her seamstress skills, she had converted it to a snug-fitting and stylish coat for their beloved terrier.

That could have been the end of the story, but when out on one of her regular walks with Manfred, Ann was asked about his leather jacket by a Panamanian lady. She was particularly keen to have similar coats made for her dogs, but with one important difference. They had to be decorated with diamonds!

Other commissions followed, and the couple then started to consider the possibility of developing their own range of high-end canine clothing, around Manfred's needs. They drew up a list of design criteria. The clothing had to fit properly, and should not blow up in the wind, exposing the dog's back. It needed to be comfortable for the dog to wear. As a result, there are no rivets on the inside of the garments, while thanks to its velcro fittings, the clothes fit snugly and are also easy to take on and off. 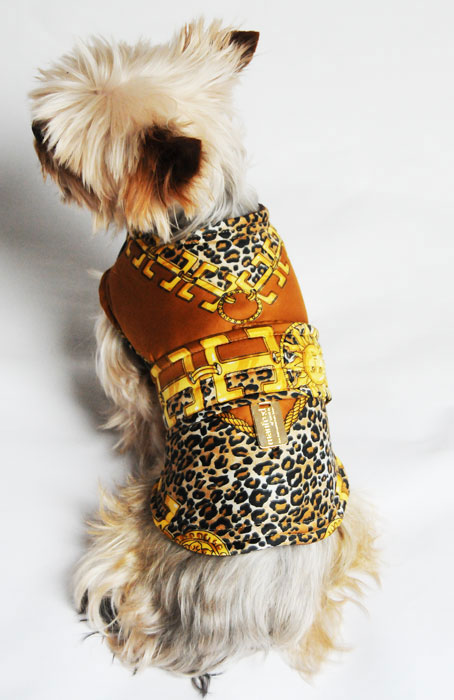 ManfredWord about this new range of canine couture, fronted by Manfred himself, soon spread rapidly, not just in Sweden but also further afield, aided in part by coverage in newspapers such as the Herald Tribune and Wall Street Journal, magazines and books as well as in-flight publications and numerous television appearances. Exhibitions incorporating Manfred's clothing at the Design Museum in Gothenburg have since been followed by others in Paris, Tokyo, Milan, New York and Seoul.
v “Manfred's character shines through when he makes personal appearances or takes part in fashion shoots,” explains Björn. “He's so calm and relaxed in front of the camera. He knows almost intuitively what he has to do, which makes him so easy to work with, and he loves the attention. Since becoming a celebrity, he's kissed many of the most beautiful women in the world, and is now frequently recognised out on the street. His hair is trimmed quite short, so it does not look as if he is treading on it, and this style gives him quite a distinctive look."Manfred in a vintage garment

It was not long before stores in Sweden were contacting Björn, asking to stock Manfred's clothing. But the couple have set very high standards for their retail partners, and Björn frequently turns away would-be outlets. “Even in Sweden now, we have just a few shops selling the range,” he says. “We want to maintain the quality, not just of the clothing itself, but also the service, to ensure customers are happy. Most importantly, staff need to be taught how to ensure that dogs are measured correctly and to be certain that the clothing fits properly.” 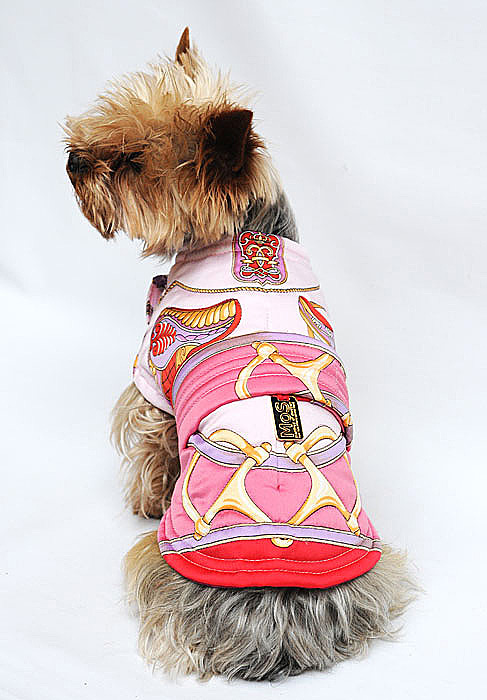 Dogs de Luxe in Paris, L.A. Dogworks in Hollywood and Tony Valdrty in St. Petersburg are some of the top-end retailers stocking these garments. There is no shortage of celebrity customers either - these include Kelly Osbourne, Robin Williams and Amy Tan.

Björn had worked previously in the music industry, and he has used his interest and contacts in this field to develop themed garments for Manfred's range. The famous rock photographer Jan Olofsson's images of stars such as the Beatles, the Rolling Stones, Johnny Cash and Jimi Hendrix decorate some of Manfred's garments.

The Manfred of Sweden® brand represents a unique fusion of fashion and functionality. Björn considers the range being closer to the catwalk than the doghouse. “We pick up on fashion trends, in terms of colors and design,” he says. “Silver and gold will be in demand this year”.

Customising clothing is key to the range. “Although Manfred is small, we can and do produce clothes for dogs of all sizes, including Great Danes,” explains Björn. “But each is treated as an individual, and we will help to advise customers as far as colors are concerned. For example, we will never recommend anything brown for a black and white dog. The colours as much as the garment need to enhance the dog's appearance and character.” 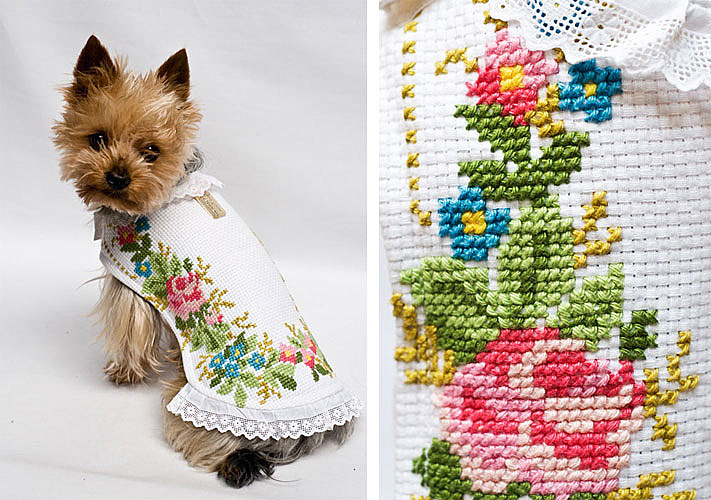 Quality remains paramount in manufacturing and even today, Ann may make some garments personally herself. Some of the material used in the latest range was actually her mother's vintage fabric, with the garments being strictly limited on this basis. Prices start from around 425 euros.

zzz “We want things to be good for the dog, rather than the owner - otherwise why do it?” asks Björn. Manfred of Sweden® does not produce very elaborate outfits as a result. “Although we might consider designed a bridal gown for example, there wouldn't be a veil” he says. “On the other hand, we do produce coats decorated with crystals. There are trends within the dog clothing industry too - when we started, military camouflage outfits were very fashionable, but these are now less popular.”

There have been trips to the US and Brazil, as well as Japan where Manfred is becoming increasingly recognised as something of a superstar. However, he couple's ambitions are not perhaps what might be expected. “Sure, we want to raise the profile of Manfred of Sweden through the world, but at our own pace,” explains Björn.

“Our ambition at this stage in our lives is simply to have fun. To meet interesting and nice people through the business and to explore things. It's an fascinating and unforeseen journey that we're on with Manfred, and most importantly, we would never want to do anything that might harm him at all.”

* You can read more about Manfred in my book The Dog Interpreter, which is available to purchase here.