There have been many new breeds of cat created over recent years, and much of the focus has been on transferring the striking patterning often associated with wild cats into domestic bloodlines. The Bengal breed (seen right) is the best-known example of this process at present.

This aim has been achieved in two ways - firstly, by attempting to create new breeds that resemble wild cats, relying entirely on domestic cat bloodlines as typified by the ocicat (left). Quite complex breeding programmes have been necessary for this purpose - none more so than in the case of the Californian spangled, a breed specifically devised to resemble a mini-leopard. Its origins were based on pure-bred and street cats drawn from around the world.

The other approach has been to pair domestic and wild cats together. Perhaps surprisingly, this approach is not new. Back in the early days of the cat fancy, during the late 1800s, it was surprisingly common for hybrids bred from matings between domestic cats and their wild relatives to be exhibited in classes at larger cat shows especially. At least ten different pairings were recorded during that era, but none of these crosses ever ultimately gave rise to a distinctive breed.

This was probably for a variety of reasons, not least because of a lack of understanding of what was involved in this process. There would also have been behavioural issues to contend with, such as shyness and aggressive behaviour in the case of the offspring, compared with domestic cats. Furthermore, a number of new and distinctive cat breeds were becoming available from overseas during this period, and these soon captured the imagination of cat fanciers.

The possibilities offered by wild cat hybrids were apparently soon forgotten at that stage, as breeders concentrated on developing new domestic varieties. The likelihood is that people may ultimately have been discouraged because of infertility problems that typically arise in the initial stages of such breeding projects, but the situation has changed radically over recent years.

The savannah cat is the largest of the breeds of hybrid origins that currently exist. It was bred from the Tame servalserval (Leptailurus serval), as seen right, which is a wild cat native to Africa.

Today, however, the issues involved are better understood. At the outset, a male wild cat is used, with the domestic cat mother rearing the offspring on her own.
Litter sizes initially, following pairings of this type, are typically small though, often consisting of just one or two individuals, and the kittens themselves will not be especially friendly. It typically takes four generations for hybrid cats to settle sufficiently to make calm, home-loving pets.

These young cats are described as being F1 generation crosses, and are likely to display a number of wild cat behavioural traits. The next phase in a breeding project of this type, having transferred the desired genes, is simply to carry on crossings with domestic cats.

Some of these F1 offspring may be infertile though, creating difficulties in this regard, but no further wild cat crosses are used. By the time that the F4 generation is reached, litter sizes are usually on the increase. Furthermore, the kittens will be almost identical to domestic cats, in terms of their friendliness, and they will be quite at home living indoors, rather than in an outdoor run.

It is then possible to cross them freely with other domestic cats, in order to introduce new colours to compliment the desired patterning. The snow Bengal, as shown above, was created in this way by crossings between Bengals and Siamese cats.

Devoted to the dream

The possibilities of creating cat breeds through hybridisation were described by a young genetics student called Jean Sugden, who wrote a paper on the subject in 1948, while studying at University of California, Davis. Her interest in this subject was ultimately to give rise to the best-known breed of this type that has been created to date, in the guise of the Bengal cat.

The Bengal's origins can be traced back to a research programme begun during the late 1950s however, into the illness known as feline leukaemia. This was at a time when this disease was little understood, and no vaccine was available to protect cats against its potentially deadly effects.

Part of this investigation entailed cross-breeding between domestic cats and the sleek-coated Asian leopard cat (Prionailurus (Felis) bengalensis). Such crossings were carried out because it was thought that these particular wild cats were immune to this infection, and it was hoped that it might be possible to transfer their immunity into domestic bloodlines.

The appearance of the resulting cats was also very attractive, and subsequently, in 1981, Jean Sugden (now known under her married name as Jean Mills) began a breeding programme with the aim of transferring the markings of the Asian leopard cat into a domestic bloodline.
Interestingly, this was one of the first crosses that had been documented back in the 19th century. Today, the Bengal has established a wide international following, is recognised by cat organisations worldwide, and exists in an impressive range of colours and patterns. Even so, careful socialisation for this breed is recommended.

The naming of new breeds created by wild cat hybridisation has subsequently followed the trend set with the Bengal, which takes its name from the species' name of its wild ancestor - Felis bengalensis.

While the Bengal is currently the best-known example of a domestic cat with hybrid origins, there are a growing number of other breeds of this type. Most have been created originally in the USA, because of less onerous rules surrounding the ownership of small wild cats.

The chausie may not be as well known as the Bengal, but it could predate it by several thousand years! It is thought that in ancient Egypt, where there was a cat-like deity recognised, known as Bastet, domestic cats may have interbred quite freely with jungle cats (Felis chaus), as seen right, which occur in that part of the world. These would have been the first chausies.

The jungle cat is very similar in appearance to a domestic cat, and is noted for its surprisingly bold nature. A black-tipped tabby chausie. These particular cats do not display such striking patterning as the Bengal.

Modern chausie bloodlines date back to the late 1960s, with the breed first obtaining recognition for show purposes in 1995. Perhaps the most obvious feature separating chausies (see left, photo courtesy Lance Klausner) from ordinary domestic cats is their long legs, although in terms of their weight, they are not as heavy as the Maine coon. 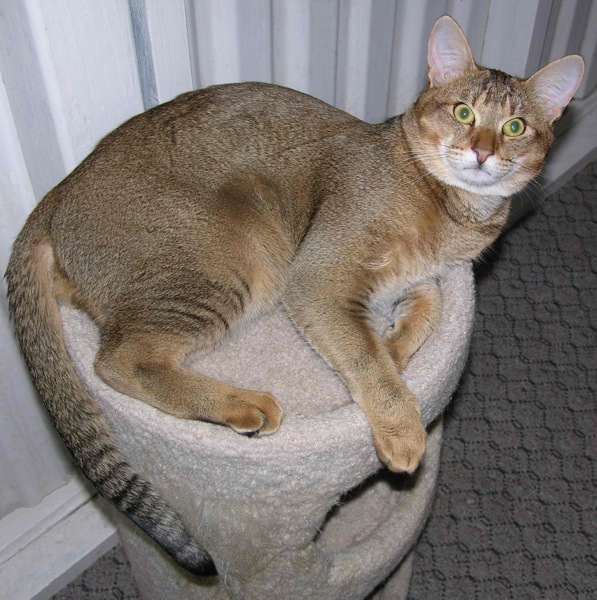 The jungle cat has contributed to the development of more than one domestic breed, as it has also been crossed with the relatively rare pixie bob breed, resulting in the breeding of the so-called jungle bob, and with Maine coons themselves, creating jungle coons.